HOME    About McQuaig    The Science

Welcome to The Science. Here you will find technical and validity information about McQuaig.

Major psychometric instruments in the UK should be registered with the British Psychological Society (BPS) and the Psychological Testing Centre (PTC) to prove it passes all the benchmarks laid down by the European Federation of Psychologists Association (EFPA). 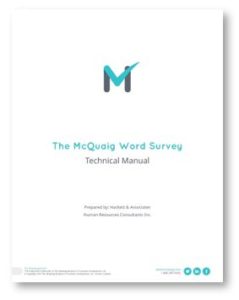 McQuaig has been reviewed in depth by the BPS and awarded the ‘Quality Mark’ which shows that the instrument has been registered as a test with the BPS and the PTC. Originally formed to consolidate activities in psychological testing, the PTC includes:

The BPS & PTC instituted a “Certificate of Registration as a Psychological Test”. The intention of Test Registration is to provide members of the public with a means of distinguishing genuine psychometric instruments from other less rigorous and objective instruments. This also includes other forms of assessment that do not meet the minimum criteria necessary for classification as a psychometric instrument.

Read the PTC review of McQuaig

McQuaig is based on over 40 years of validating research. Much of this research is freely available to clients.

Psychometric testing is a practice that measures a variety of characteristics including (among many) mental agility, aptitude, personality, etc. Psychometrics allow you to weigh up the accuracy of your decision.

Put simply, psychometrics are a set of techniques used to ensure, among other things, that:

To meet the highest standard of validity, psychometric tests or assessments must go through several stages of development:

Read relevant LinkedIn groups or a basic book on people at work and you will come across the term ipsative, often compared with normative. These two approaches seem as incompatible as capitalism and communism. And their respective ‘fans’ don’t seem to like each other much either.

Ipsative and normative describe what you’re measuring and how. They’re simply different sorts of human tape measure. Normative tests compare an individual’s performance with other people.

If Joe takes the normative ‘Acme Test of Accountancy Skills’ the results might say he scored better than 50% of a comparison group whether that’s successful accountants or Premier League football players. Therefore, his result will be different (and more or less useful) depending on whom you compare him with.

Ipsative tests compare Joe with himself. The test forces him to choose what he prefers or does better out of the alternatives offered. So an ipsative test of accountancy skills might ask Joe if he preferred finding ways of avoiding tax or presenting accurate accounts. You could also compare Joe’s preferences or strengths now with those two years ago. We use ipsative assessment in real life all the time. For instance, a menu is an ipsative test: Which starter do you prefer?

Where does McQuaig fit in all this?

Testing for proficiency dates back to 2200 BC China, when the Emperor would make use of gruelling fitness assessments for his prospective warriors.

Modern psychometrics have their roots with Charles Darwin’s cousin, Sir Francis Galton, who lived from 1822 to 1911. Individual’s differences fascinated him. It was Sir Francis who showed that objective testing could provide meaningful scores.

Psychometric testing rose in popularity throughout the twentieth century. Today a psychometric test is best described as a ‘standardised assessment’. It looks at human behaviour and describes it with scores or categories.

There are some tests that assess intelligence, and others which test capability or personality traits. Psychometric testing also assesses cognitive, sensory, perceptual or motor functions.

These days, many employers make extensive use of these assessments, especially online psychometric tests, and especially when recruiting graduates in whom they will be making a substantial investment.

Through the work of Canadian psychologist Jack H McQuaig, The McQuaig Institute has constantly developed McQuaig for over 40 years. It is one of the most established and researched psychometric tools available for business.

A Brief History of McQuaig

The McQuaig Word® Survey (WS), was published in 1967 by The McQuaig Institute™ of Executive Development. It was developed under the guiding premise that individuals have characteristic levels on various personality dimensions that are fairly constant (or at least stable in rank order) from one situation to another. Moreover, work behaviour is viewed as largely a function of the complementary match or congruence between the individual’s personality style and the psychological work environment.

The WS was accordingly developed as a tool to assist vocational counsellors and personnel managers in matching individual personality types to occupational groups. Research has suggested that complementary person-work environment links are reinforcing and satisfying and contribute to persistence in those environments (cf. Holland, 1973). On the other hand, incongruence between personality type and work environment is non reinforcing, increasing the likelihood of suboptimal performance and eventual turnover.

The McQuaig Job Survey® (JS) is a companion instrument to the WS and provides a means for describing the WS personality profile most suitable to specific jobs. This instrument and supporting research are described in detail in the Technical Manual.

Developments in personality psychology since the first release of the WS over 30 years ago affirms that people can be characterised in terms of their enduring dispositional qualities and that this information can be used to improve Human Resource Management and overall organisational effectiveness (cf. Barrick & Mount, 1991; Hogan, 1991; Tett, Jackson, & Rothstein, 1991).

The academic department at Nuffield is one of the largest of its kind, leading the world in reproductive health research. Head of Administration and Finance, Lesa Levett talks about the impact that McQuaig has had on team development and culture change.